Have you ever wondered at what makes an avalanche so powerful? It is because of a snowball effect. Lets define it.

“a ​situation in which something ​increases in ​size or ​importance at a ​faster and ​faster ​rate: The more ​successful you ​become, the more ​publicity you get and that ​publicity ​generates ​sales. It’s a ​kind of snowball ​effect.” Cambridge Dictionary.

“Metaphorically, a snowball effect is a process that starts from an initial state of small significance and builds upon itself, becoming larger (graver, more serious), and also perhaps potentially dangerous or disastrous (a vicious circle, a “spiral of decline”), though it might be beneficial instead (a virtuous circle).” Wikipedia

“ (adj.) descriptive of an entity or situation where something once small and relatively insignificant grows exponentially at a swift pace, engulfing everything in its path. A more dramatic progression than the classic domino effect. The basic workings of a literal snowball effect can be illustrated by taking one’s average baseball-sized snowball and dropping it down the side of a snowy hill. As it descends it gathers more snow and whatever leaves, sticks, etc. are in its way. The snowball accumulates not only size, but speed.” Urban Dictionary

Put simply the rolling of a small ball snow down a snow-covered hillside results in that snowball growing slowly is size as it picks up anything in its way. It also gathers momentum and speed as it rolls down the hill. As it rolls the ball will pick up more snow, gaining more mass and surface area, and picking up even more snow and momentum as it rolls along. The higher the hill slope the longer it travels and gathers more momentum and grows until it becomes an avalanche that destroys anything in its way. At some point it becomes an unstoppable and exponentially growing force.

Compound interest works the same way. It builds slowly and in unnoticeable ways at first.

Just as a snowball compounds and grows, so can your wealth through compounding.

Compounding interest at its core is best served by conservative investing. Someone who chases speculative and very trendy stocks won’t see the power of compounding interest. An investor whose primary concern is compounding interest will instead look for the company that is growing slowly and surely. Like the tortoise who plods along at a painstakingly slow pace, an intelligent conservative investment will beat out any high flying “trend / technology” stock of the day. Time and time again. Warren Buffet has grown his wealth through the same process. He buys bargains with great potential and holds on to them. Then allows time to do the work of compounding. Warren Buffet is quoted as saying, “I always knew I was going to be rich, so I was never in a hurry to.”

One of the best pieces of investment advice you can get is simply this: “Invest the same amount every month and be consistent/diligent over a long period of time.” The name for this investment strategy is Dollar Cost Averaging. Compounding interest is best pursued when you are dollar cost averaging. Use this system to your advantage. It builds on the snowball effect. You keep getting interest on interest and your invested amount continues to grow. If you are investing on the Stock Exchange then you can use a similar method by reinvesting your dividends rather than cashing out. Econet Wireless in Zimbabwe grew using the same method. For the greater part of its first 5-8 years it did not declare any dividend but reinvested its earnings. The snowball effect of compound interest took care of the rest. When they started declaring dividends it was an almost unstoppable avalanche.

The two graphs below show the snowball effect of compound interest over your investment life. They demonstrate the need for patience and diligence. Initially there is no evidence that you are building wealth. 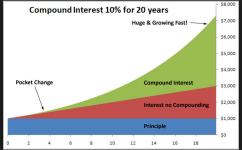